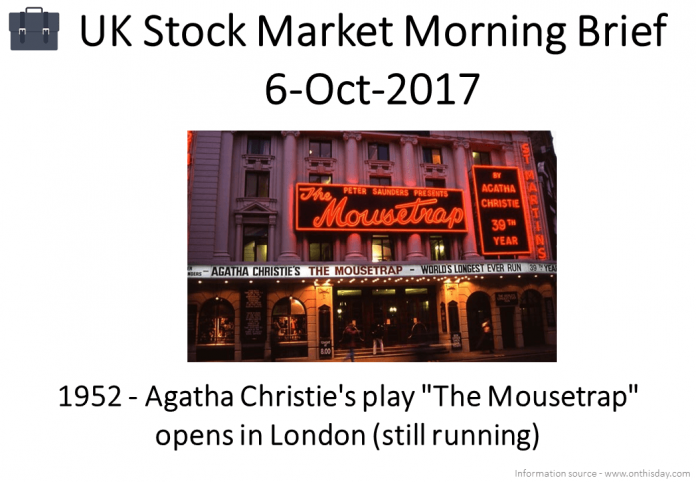 Not a huge amount to cover this morning.

Closure Of Grain D’Or And Trading Update For The Year To End June 2018 – Closure of a loss making factory (for the financial year to end June 2017 it reported an operating loss of £3.33 million on revenues of £28.5 million). Costs could be up to £10m spread over 7 years, but likely to be in the region of £6m. The Company will benefit from the cancellation of planned capital investment programmes in Grain D’Or, which were significant. The Board’s expectations for the year to end June 2018 remain consistent with the guidance previously delivered to the market, albeit that the adjusted profit performance will be achieved from a lower revenue base. This Seems like a positive move but I just get a bit of a calm before the storm feeling here – For some strange reason.

Not something I would be investing in at present.

Trading Update For The Year To End September 2017 – Results expected to be marginally ahead of the Boards expectations. Group Revenue for the year up 8.9% and also considering (due to strongcash generation) a return of capital to shareholders.

Tempted a little here, but on a PER of 15 it’s probably about fair value here. A correction to the 160p level (which has happened a number of times in the past) will be more tempting.

On a PER of 8.13 – If there’s interest in the sector out there, this update should provide a tailwind here (for those not worried about the HUGE Net Debt).

Interested to see how that FIF update goes down!

Wishing all a great weekend.