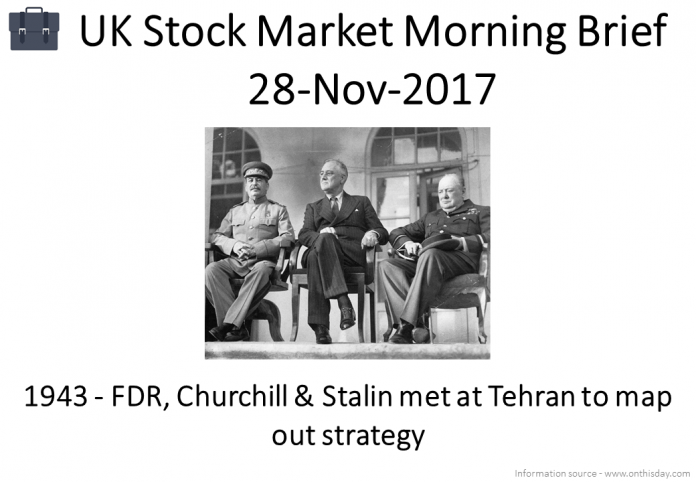 A little late here, 12 reports and a couple of holdings I wanted to keep an eye on at the open. Apologies now for errors, etc. – Was really quite a mad morning!

Note: I also missed off the GMD news which seems to be a move for the better.

Final Results For The 12 Months To End September 2017 – I looked at these numbers a couple of times (in my limited morning period) and can just take away what these results seem – Just OK.

I’m Neutral here and why does the Chief Exec insist on stating “Whilst the Group has not yet detected any major loss of confidence from either existing or prospective customers, the Board and senior management continue to carefully monitor market conditions, customer confidence, as well as the development of sales prospects and the progression of these sales prospects into customers”?

Remaining Neutral here for now but will keep an eye on updates here.

Interim Results For The 6 Months To End September 2017 – Opens with “As experienced in some previous years a higher proportion of our business is expected to close and be delivered in H2 2017.  Despite a lower first half due primarily to a change in the timing of contract awards by comparison to the same period last year, the Board remains confident of achieving management expectations for the full year based on recent business wins and the depth and quality of the prospects pipeline”.

The Board remain confident the full year results will be in-line – I will be watching from the side-lines.

I am a holder here and remain so.

Final Results For The 12 Months To End September 2017 – Don’t like the look of this much – Highlights, Revenue down slightly, PBT down 15% (£17m), Final Dividend cut 8% and Net Debt also increased.

I can’t see any attraction here.

Although this latest update is considered “in-line” this is coming off my Watchlist for now. Sure, it may well perform as promised in the 2nd half, but then again, it may not. Gift vouchers and prepaid gift cards doesn’t exactly inspire these days either.

Final Results For The 12 Months To End September 2017 – Nice headline “Adjusted PBT up 46% and adjusted EPS up 42% as the Group delivers a strong set of results”. Revenue is up 24.5% to £109.6m. Impressive and seems to be in-line and the Board expects trading to continue in-line.

Doubled this past 12 months on a PER of 21.4 it’s starting to look a little more attractive. It’s going on my Watchlist.

Up 50% this past 12 months, this is still looking quite attractive. Keeping me on the fence here is the poor ROCE and Operating Margin (not only generally poor but poor for the sector too). Perhaps I am being too vigilant.

I still like the look of this. Nice growth, Revenue, Profit and EPS. A nice ROCE of 15% and a small well covered Dividend. It’s on my Watchlist and if the market is disappointed with these results I may be a buyer soon.

I still quite like this but and I’m not sure what’s making me sit on the fence here (perhaps I think it’s too expensive on a PER of 25.7) – But I am.

Looking a bit closer at the Stockopedia numbers I actually decided to pass on this (and this update backs me up). I just don’t like the flat Revenues, EPS inconsistencies, the variable Operating Margin and ROCE. It just seems like an “anything can happen” here company – Not for me.

Trading Update – “Trading since the interim results has remained strong. Given current levels of business, the Board expects revenue and EBITDA to be significantly ahead of market expectations for the year ended 31 December 2017” and “The Board is also pleased with the recent investment in eSports.com by Veltyco, as announced on 11 October 2017, which is already showing great promise and is anticipated to contribute to the growth of the Company in the years to come”.

I am a holder here and remain so.