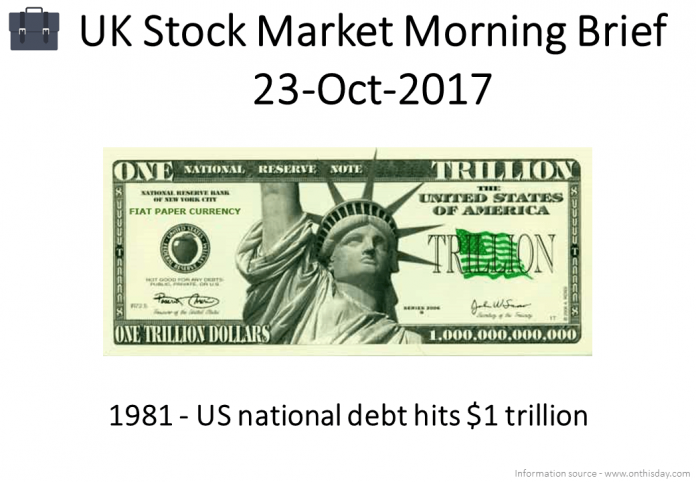 What a busy morning…

Trading Statement – H1 Revenue up 13% (LFL), 20% including newly acquired Brighter Foods. Margins have been hit though (cost of butter mentioned again) and from a forecast EBITDA of £6.5m the group now expects to make a loss. Actually, they had already revised down to £2m at the beginning of August and to £1m at the end of August. Anyway, they say it comes in 3’s so here’s your 3rd profit warning! And, this is worrying “Should it be, in light of the Board’s revised expectations, that the current banking covenants come under pressure, the support from the Major Shareholders would extend to ensuring the facilities are maintained”.

The PER here is 5, I think even that’s generous!

Interim Management Statement 1 July to 20 October 2017 – A weird selection of dates and a really muddy update in my opinion. The basics seem to constitute a profit warning with PBT expected to be £60m. I am not much interested here as the update is horribly structured and very unclear. But, anyway, let’s use my “have a guess at it” interpretation – Stockopedia has a Net Profit for 2017 of £60m so if we add 25% (assuming tax is about 20%), that gives us £75m PBT.

This is basically a profit warning and a 20% miss.

How much of a profit warning this is I have no idea.

Trading Update For The 6 Months To End September 2017 – A nice update here – “Gross revenue and draft operating results are in line with expectations and significantly ahead of the prior year corresponding period”.

Looks like quite a nice little company, revenues growing, profits too (although forecast a slight dip this year on increased revenue), ROCE good, a small well covered yield and plenty of Cash! May take a more detailed look at this later.

On a PER of 18.5 here though, I am going to maintain that view once again – Perhaps wrongly, again!

Quite a volatile share and maybe one worth a look around the 400p level.

Trading Update For The 6 Months To End September 2017 – An in-line update.

First time I have come across this company – It moves around quite a bit (15p – 25p) and may well be worth a look at the 15p level.

Trading Update For The 6 Months To End September 2017 – An in-line update with the Net Debt reduction being highlighted.

Why can’t I get excited about this company, I think it’s because, rightly or wrongly, Google Maps or another competitor could easily kill the business.

At my count that’s 3 profit warnings – Be careful out there!

That’s all from me today.