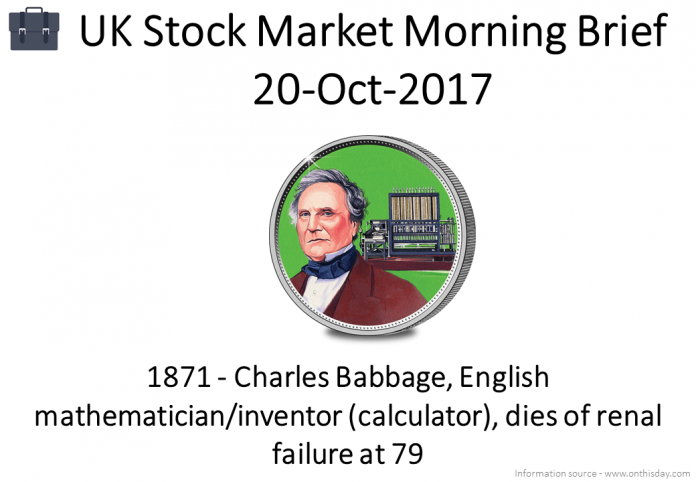 Q2 Trading Update – This update seems to indicate things seem to be quite flat here.

Up almost 100% in the past 12 months it’s a strong share price performance for a company that’s not exactly growing or even forecast to grow very much. On a PER of 13.5 even although the market and Stockopedia (StockRank 96) seem to like it – It’s in the “too difficult for me” pile.

Trading Update – Confirmation that trading since 25 August 2017 has been “very strong”. The company expects “performance for the year ending 31 December 2017 will be materially ahead of the Board’s existing expectations”.

Although the SP is up 50% YTD, the current PER of 11.9 suggests there’s still value here.

Trading Update For The 6 Months To End September 2017 – An in-line update which includes this statement “Net cash at 30 September is expected to be in the region of £3.1m and the Group remains well positioned to continue its acquisition-led growth strategy”.

Up almost 20% this week, hope the insiders like this! I can’t see the big attraction but it’s on my list to look into a little more.

Preliminary Results For The 12 Months To End June 2017 – Revenue flat and Adjusted PBT of 0 (+£92.1m last time). I didn’t bother reading the rest as it was just too complicated for me. I noticed also board changes announced today.

After it’s fall from grace 6 months or so ago, I just don’t know if this is a good opportunity or not – Another one for the “too difficult for me” pile this morning.

Quite liking BOOT and MRL may be worth a further look.