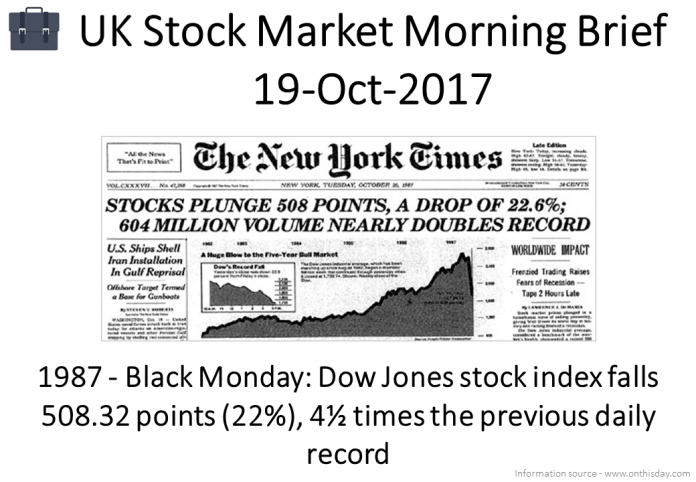 These recent results seem slightly ahead of forecasts but on a PER of 36.6 were probably expected.

Q3 Trading Update For The 9 Months To End September 2017 – In-line expectations with this impressive statement – “In the 12 months to 30 September 2017, Group Annualised Recurring Revenue (“ARR”), increased by 40% to £52.9 million (September 2016: £37.9 million at constant currency), which includes the addition of ARR for Delta, the cloud-based risk and performance analytics service, acquired in May 2017”. And, the Chief Exec had this to add “We continue to make solid progress migrating our software to pure cloud-based delivery which will improve our operational efficiency and increase our margins. The integration of Delta is also going well.  Our roadmap to add the excellent and complementary Delta functionality into our flagship cloud platform, Revolution, has been well received by clients”.

On a PER of 22.6, perhaps worth a position here ahead of seeing the actual profits on this Revenue increase.

Trading Update For The 12 Months To End September 2017 – Expecting to report Revenue and PBT ahead of market expectations. And the board is pleased to report “the Group has made good progress during this first year of the Group’s five-year growth plan and is on track to achieve the goals we stated in December 2016 to double profits and triple recurring revenue by 2021”. An impressive update and well liked by Stockopedia with a StockRank of 93.

Trading Update For The 12 Months To End September 2017 – Results expected to be in-line with market expectations.

Up 50% in the past 12 months I just don’t see how the forecasts justify the PER of 20 here – Other than the overly impressive Operating Margin and ROCE, both 20%+.

Trading Update For The 12 Months To End September 2017 – Adjusted PBT is expected to be in linewith the boards expectations here and “the integration of Sunshine.co.uk Limited, acquired in May 2017, has progressed in line with our expectations”. It is worth noting this comment “As stated in the RNS on 2 October 2017, the Group has Scheduled Airline Failure Insurance in place which covers the failure of Monarch Airlines. The Board anticipates that there will be a one-off exceptional cash cost associated with helping customers to organise alternative travel arrangements or providing refunds and will update shareholders further on release of the Preliminary Results”.

Trading Update – Further woes here “there is a realistic prospect that we will not meet the net debt to EBITDA test contained in our financial covenants for 31st December 2017. As previously announced, we are engaged in constructive and ongoing discussions with our lenders.  We have engaged a financial advisor to assist us in these discussions, as well as looking at options to maximise the short and medium term cash generation from the business”.

Be careful out there!

And that’s it from me this morning…