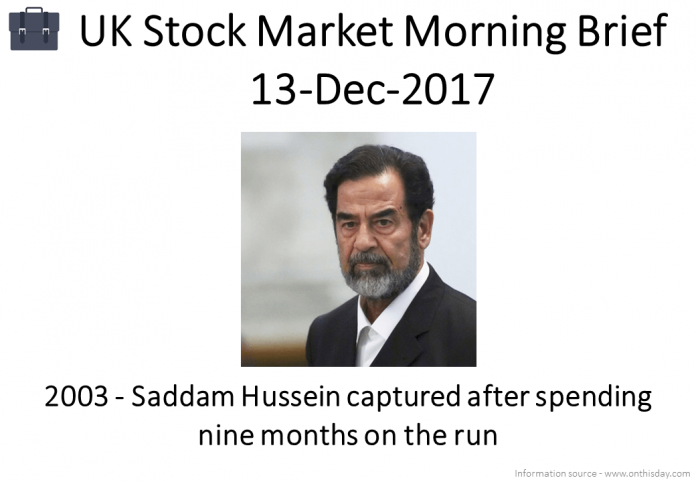 Final Results For The 6 Months To End October 2017 – I picked this statement out “The Group’s first half results were slightly down on last year.  In recent years the Group’s results have been heavily weighted towards the second half and we expect this pattern to be repeated this year”.

Looks OK but at the end of the day it’s a low margin consultancy business. I am just not willing, at present, to accept the associated potential surprises here.

Trading Update – This doesn’t look good – “Demand has weakened further, and in the 3 months to 30 November 2017 (LFL) the Group’s sales have been 0.3% lower by value, and 6.8% lower by volume”. Underlying PBT is expected to be below current market expectations, at a level of least £15m. And they “expect market conditions to continue to be very challenging in 2018”.

I will be avoiding this one for now.

Year End Update – The Company has identified a small number of revenue items that it does not consider should be recognised in the FY2017 results – Expects EBITDA for FY2017 to be circa £20m (compared to about £23m stated in November, and £21.5m in 2016).

A bit of a yo-yo share at the moment and something I will not be getting involved in for now.

Trading Update On Performance For The 11 Months To End November 2017 – In-line and taking market share (from Safestyle?).

Although the fundamentals look attractive enough here, this update is not exactly inspiring.

I am Long here and haven’t got a clue whether this is a good deal or not – Wouldn’t one have thought to include some financials in this update? Will have to keep an eye on the market reaction this morning. I was going to finish with an expletive here!

Update On VAT Claim And Share Buy Back – Higher taxes will now negatively affect the Company’s operating margin. Expects to report PBT of not less than £1.4m (2017: £1.5m). The impact on FY19 is expected to be more pronounced, with forecasted PBT of not less than £1.2m. Worth keeping an eye out on the level the buy-backs kick in “as and when they become available at volumes and prices that, from time to time, the Board of BOTB considers appropriate (“Buy-backs”)”. Does this look like it’s going to go private “Due to the limited liquidity in the issued Ordinary Shares, a Buy-back of Ordinary Shares pursuant to the Authority on any trading day is likely to represent a significant proportion of the daily trading volume in the Ordinary Shares on AIM and is likely to exceed 25 per cent”.

I quite liked this company before-hand but I just have no idea how to interpret this so I am going to observe from the side-lines for now.

Have great day all!