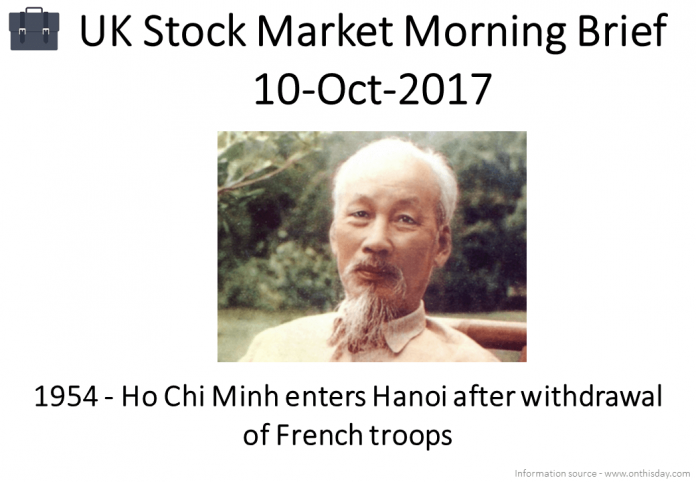 Interim Results For The 6 Months To End July 2017 – Seems disappointing.

Interim Results For The 6 Months To End July 2017 – Improvements, slow and steady as the company “Turnaround (is) delivering improved results”. Adjusted EBITDA up from a -£0.4m Loss to a Profit of £0.3m. The CEO is confident for the full year and the board believes that that the current bank overdraft facility is sufficient to support the company’s working capital requirements.

After a Profit warning at the end of 2016, the share has doubled from the low – This update may encourage others to believe a corner has been, or is at least starting to be, turned.

Q3 2017 Market Update – Seems quite positive “a landmark period for Iofina – The Group produced more iodine than expected and began implementing management’s strategic expansion plans by starting the construction of IO#7, at a time when global iodine prices continue to recover”.

I don’t like the Net Debt here (almost 100% of Mkt Cap) or the fact it’s never made a Profit. I am sure there’s a business case here for those that understand the industry – I do not.

Interim Results For The 6 Months To End July 2017 – Seems rather flat, actually perhaps, even a slight miss here to the downside.

The fact I am not particularly attracted to this company on the basis it is good at improving Revenue but Profit just doesn’t seem to follow – It is a slight concern they are reporting flat Revenue here.

Trading Statement For The Quarter Ending September 2017 – Gross Profit up 21% (CC) on a LFL basis. The board is also confident “that profit before tax for the full year will be ahead of current market expectations”.

On a PER of 15.4 RWA still looks reasonable value here. It’s a share on my “buy on a general market pullback list” but also one I keep considering paying up for and look back regretting I did not.

Trading Statement For The 6 Months To End September 2017 – Seems like a bit of a profit warning here – Even though LFL Revenue is up 10%, there’s a Loss of £1.7m and “No material milestones from projects were completed during H1 2017 and thus no project revenues were recognised”. The CEO does however look forward with confidence to the second half of the year”.

I am not convinced (as convinced as the CEO) by the latest update!

Trading Statement For The 12 Months To End September 2017 – The CEO defines this as a “year of accelerated growth” with LFL Revenue for owned hotels increased by 13.7% and for franchised hotels by 8.6%. A lot of talk about added and planned rooms.

I am not a big believer here, in the sector (hotels) or in the ability of this company to turn increased rooms (Revenue) into increasedProfits. It may be true that there is “accelerated growth” here, in terms of number of rooms but that’s about it for me.

Final Results For 12 Months To End July 2017 – Revenues up about 20% (14.5% CC), Profits, EPS and Dividend up about 10%. Seems to be pretty much in-line. The CEO states that the “new financial year has started well with organic growth ahead of that achieved in the same period in the prior year”.

Considered trading the break-out above 200p here but I don’t think this update warrants either action – A break-out or a subsequent participation.

Will have an eye on RWA and FAN this morning…