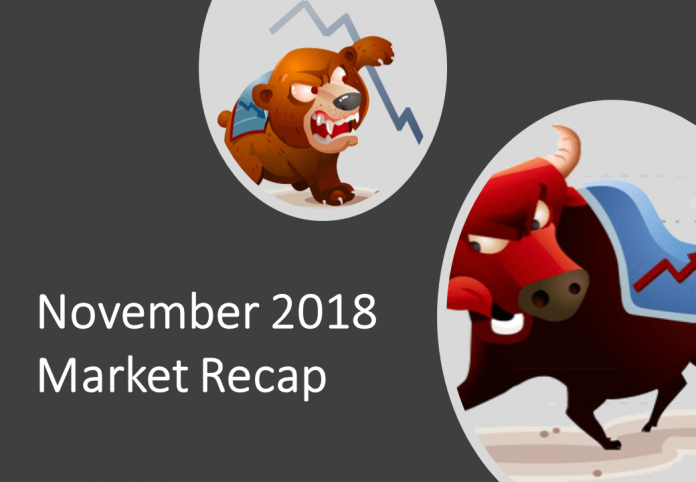 As always, this is a recap of my trading activity from the previous month.

What a busy month (for me) October was – With 2 purchases and 10 sales as I had a bit of a clear out, in order of execution…

On the 23rd of October, having had a number of holdings on a sell list, I decided to act – Below are details of the 9 sales…

1 – Alpha FX (AFX) – This had been on my Standard Tech Screen for a while and I bought in after liking an update which confirmed Revenue up 50%+ and confidence in FY earnings to be in-line with expectations (EPS growth of +35.2% (2018E) and +16.9% (2019E)). The ROCE and Operating Margin are great and there’s Cash in the bank too. However, with my Growth and Value analysis showing 660p as a 2 year price target I decided that cutting at 600p+ was justified. Although I suspect upgrades may come through depending on how they use that Cash – Willing to change my mind here if this is the case.

2 – Bloomsbury Publishing (BMY) – Only bought in here on the 2nd of August having hesitated for quite some time.  I was quite liking the yield here and the growth potential (the story), such as new publications doing well, legacy publications (Harry Potter) also doing well and potential for on-line to (hopefully) improve too – It also met my Standard Tech Screen at the time.  I knew at the time these “stories” would have to continue and that the forecasts alone did not fully justify my initial purchase (I estimated about 20% upside over 2 years with a decent yield thrown it). This was a case of exiting, I guess, a purchase I should not have really made in the first place (one I talked myself into more than anything else).

3 – Elcosoft (ELCO) – This is a holding I meant to sell after a bit of a cautious update in September. Instead I watched it slowly fall away as the general market sold off. Took a small Loss here when I should have taken a Profit.

4 – Macfarlane (MACF) – I estimated a 100p 2 year price target here applying my usual analysis approach for Growth and Value at the time of the last update. I should have sold then but kept it on my potential Sell in a market downturn list – So, it was sold (late).

5 – Morgan Sindall (MGNS) – Having fallen 20% from it’s ATH and with EPS growth forecast at just 1% for the year after next I sold out here. Upgrades may see me revising this decision.

6 – Quixant (QXT) – Having believed this to be fairly priced following an update in September I should have sold out then. Instead I waited and let it slip from a Profit to a small Loss.

7 – Somero (SOM) – Another one where I noticed slowing EPS growth (which should have been sold sooner (when I noticed it)) – Just 3% and 6% in the next 2 years respectively, according to the latest Broker note I have (FinnCap 5th of September on Research Tree).

8 – Volvere (VLE) – Having sold off the main business and with little idea what was going to happen with the cash here I decided it was prudent to sell up.

9 – Water Intelligence (WATR) – Having sold half for 100% Profit I sold the remainder here. I should have sold when 20% off it’s ATH to be honest and kicking myself a little for letting more Profit slip. Overall though a more than decent 100% or so return in 12 months.

And, that last purchase…

And one final (kind of forced) sell…

All comments as always, most welcome.

* Half profits previously taken at 100%, remainder sold as indicated